When all of the kids were little, I remember being so tired all the time. Mother’s day was the day David would let me sleep in, or take a nap in the afternoon. I always wanted to make sure everyone else also had a special day, so that meant I would end up doing lots of cooking and baking for everyone throughout the day.

One year was really tough for me because I had a relative be not so nice to me and the mean words said on the phone call resonated with me all day making me so sad. I could not shake off what had happened for the rest of the day and I just remember that it made me not want to celebrate the day anymore.

I always knew when the children were younger that they cared so much about me. They always made it a point to prepare a special note and make breakfast for me.  Davide and Siena were only 3 and 5 at the time when they started planning on their own to make breakfast for me. I used to still pitch in and help a little.

This year was different because  it was the first time that a week in advance the kids thoughts of Mother’s Day first. They  reminded me that the day was just around the corner. They spent the upcoming days often talking amongst themselves, trying to make preparations, and thinking up their own little way to come up with something super special.

They came up to me and asked me if I would like pancakes or waffles a few days before, and what my favorite flowers were. The Friday before, while at the store, Siena and Dorian snuck two Mother’s Day cards into my grocery cart while I was talking to a friend. I didn’t even notice the cards until we arrived at check out. Davide placed my favorite chips in the cart as well.

The night before Sunday we had just arrived from a trip and they kept asking me questions about Mother’s Day.

I told them that what I looked forward the most, was to please help me to keep the home clean in the morning, so that during the day we could all just relax and not have a lot of work to do.

Dorian, Davide and Siena all slept in the same room, and the next morning they were up bright and early around 7 talking happily amongst each other while showering and getting ready for church all on their own. They made their beds and cleaned their rooms just like I had asked, and ran downstairs to make breakfast.

David helped them make it since he knew I love German Pancakes, which are also super simple to make. While they were cooking I got dressed and ready for the day.

So I got my wish of a clean home, we all had an early start in the day, and then an awesome day spent together. The day was so great, I stepped into the kitchen and made this dessert that I adapted from Williams Sonoma.

I wrote up lots of different notes on the recipe with adaptations. Hopefully it will help you out along the way.

For an easier version just buy an angel food cake from the store, chop it up in little cubes, and you’ll only have to make the cream filler and prep the berries for assembly. Or how about a pound cake berry trifle by using store bought pound cake. Yum! 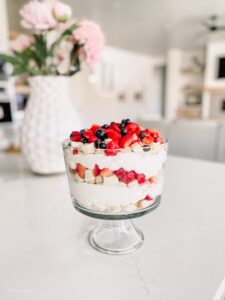 Wash and dry all the berries. If using strawberries, hull and slice them. Place the berries in a bowl. Add the sugar, orange juice, and stir gently to mix. Set aside.

Cut the pound cake or angel food cake into 1-inch cubes and set aside until ready to assemble the trifle. You should have about 6 cups.

Another great alternative is to use a freshly made white cake vanilla mix chilled.

In a large bowl, using an electric mixer on medium speed, beat together the whipping cream, sugar and vanilla until soft peaks form, about 3 minutes.

Select a footed glass trifle bowl 9 to 10 like the one in the picture above.. Arrange a single layer of the cake cubes in the bottom of the bowl.

Make sure to finish with a layer of fresh berries on top. Cover with plastic wrap and refrigerate for at least 4 hours or up to 24 hours to allow the flavors to simmer.

Just before serving, garnish the trifle with a mint leaf if desired. Serves 6.

Types of cakes you can use