An Italian classic that can be enjoyed as a breakfast cake, an afternoon snack, or served when guests come over. The coffee cake of Italy can often also be found at corner and grocery stores in prepackaged form or as a cake mix.

The crostata is  sister to the French tarte. When served in pastry shops, the tarte is usually covered by a clear glaze that is made with gelatin.

I have so many fond memories of coming home to this dish. Perfect for both summers and winters. We often made this cake whenever we had mature fruit that we didn’t want to spoil.

Often filled with jam, nutella, or a combination of jelly and fruit.

The most popular fillings are definitely nutella, peach jelly perhaps filled with sliced up apples, or with a chunky homemade fig jam. There are also many versions filled with apricots, wild berries, strawberries, and even chestnut jam.  When choosing jams alone, the crostata turns out at its best with confitures that have lots of bits of softened fruit on the inside. Homemade jams are preferred. I have seen them with fresh plums over a thin layer of jam as well.

A good rule of thumb when filling them with jam is to pair the jam flavor with the fruit being used. Other times, a contrast can be a winner as well. Take orange jam with apples for example. The sweetness of the apples combined with the citrusy flavors of the orange are a feast in your mouth.

Feel free to have fun and create your own desired toppings for this dessert at home.

A lot of the Italian home made cousine, consists of basic recipes where some of the components can be adapted in order to put seasonal ingredients to good use, as well as what may be considered leftover food that one doesn’t want to go to waste. Many dishes in Italy have a slight variation from one region to another because in the past people adapted them depending on what horticulture grew better in their area, together with what the majority of the people could afford to buy for food at the time. So feel free to also create your own variation with the fillings.

For this recipe I crated my own variation for example and I chose to do a custard filling topped with berries. 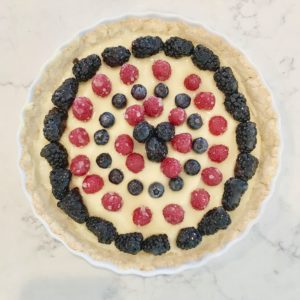 If filled with only jam or nutella, evenly spread them across the bottom so that they are at least 1/2 inch thick.