A few days ago I made my favorite recipe ever. I got the idea from my sister-in-law after I found out that I had lost her old banana bread recipe. I went to ask her for it again and she told me she no longer had it because she had been making a new recipe that her family loved. So I found on the web and changed it up a bit.  It’s an adaptation from this recipe. I have changed it to reduce the amount the sugar and to substitute part of it as well.

I like substituting ingredients because I find myself not feeling as guilty when eating them. I also like to work on getting my taste buds used to lower amount of flavoring so that I don’t get strong cravings. I talked about this on my over article on Taste Buds.

This morning I was eating it with my son while doing story time right before bed. I kept telling him no as far as the bread at first because I don’t want him to have as much sugar. He begged me and begged me for cake though. I found him laying down on the stairs waiting for me to come back down with begging face so I gave in. Luckily I knew I had made it and I knew what was in it so I didn’t feel as bad. Most days he is a pretty picky eater so I don’t mind at this time fattening him up a bit. 🙂

So I sliced him some, had some myself and then we went for seconds. Sure enough the second time around he game me the slice and took the rest of the loaf for himself. I guess in his eyes I am the selfish one that needs to work on sharing perhaps!!! I always keep the load and only share a slice!!!! Just Kidding. I don’t think he thought about it that way. It was cute that he wanted the loaf and that he still thought of giving me a slice instead.

He sure laughed at it and we enjoyed story time. Funny thing is he took two bites and didn’t finish the rest. He also saw I was stressed because I was nursing Zara while reading and eating and went to grab the vacuum to clean up the floor when we were done. 2 Year Olds make the perfect little friends to have around sometimes!

If you can play this song while making it and dance to it with your loved ones it’s a bonus! 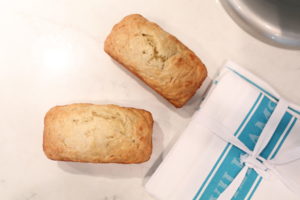